As friends in real life and rivals on the slopes, Loïc Bruni (four-time World Champion in downhill mountain biking) and Amaury Pierron (Winner of the 2018 World Cup, 2nd overall at the 2019 World Cup) are a fantastic duo. They enjoy jostling for first place on their bikes as much as they do spending time together.

These two French riders have dominated the international mountain biking scene for the past few years and will both be competing in the World Cup in Les Gets on 2-3-4 July.

Loïc Bruni (left) and Amaury Pierron (right), here winner of the 2019 World Cup round in Les Gets.

We asked them to tell us a bit about each other…

How do you think Amaury/Loïc is feeling so close to the start of this new season?

Loïc: I can’t really speak for him but I’m guessing it’s not easy because of his injury last year and the 2019 season which left him feeling quite disappointed. He has recovered from his injury and has been off the circuit for over three months, so he has to regain his confidence and build everything back up again. It’s never easy coming back after an injury – it’s a huge challenge. I think he’s looking forward to it, but he must have some doubts, so it’ll be interesting to see how our old Maumau does.

Amaury: I think he’s raring to go. He was probably a little disappointed last year, even though he finished on a win in the final race. He struggled a bit from the start of the season to the middle, things didn’t go the way he wanted, so I think he must be really ready to get back out there!

Why do you think Amaury/Loïc stands out as a rider ?

Loïc: He’s got that will to win! When he’s in that frame of mind, it’s very hard to beat him. He’s great at riding that fine line between success and failure. He always gives 100%. He scares himself at every bend, but he manages to stay in control. When he rides like that, he comes 1st or 2nd and so it’s dangerous for the overall rankings. There are very few guys who can ride like that. I can’t do it. Even if I put all I’ve got into my riding, I always hold back a little. That’s something I envy him for.

Amaury: He manages to be powerful and super smooth at the same time. He’s very steady, yet makes no noise. A bit like a cat on a marshmallow (laughters). I also think there’s something about his mental approach which allows him to win the World Championships. I haven’t worked out what it is yet, but I’ll figure it out eventually.

Your best memory with Amaury/Loïc ?

Loïc: I don’t know if it’s the best, but the first one which comes to mind is when he won his first  World Cup. It was at Fort William. I had just recovered from an injury. I finished 5th and we were together on the podium. He was so excited and I understood how he felt as I’d experienced the same thing the previous year. It was great to be able to enjoy that victory together with my mate. It was one of the few times I was happy that he’d beaten me.

Amaury: The best memory I have is an act of kindness he showed me. During the warm-up for the 2017 World Cup in Val di Sole, he said to me ‘Go for it! Enjoy yourself, ride fast and believe that you can do it.’ Thanks to that, I was totally relaxed and I managed my best result at that time – 2nd place in Val di Sole. I was so proud.

Is it hard to juggle your friendship and rivalry?

Loïc: It’s not always easy, that’s for sure. You have to accept the rivalry and manage to put it to one side when you need to. We both need to stay grounded and make sure we respect each other. Even if you’re a bit gutted to have been beaten, you’re still happy for your mate. That’s how we work anyway. That’s what makes our relationship so special.

Amaury: It’s complicated as we’re both working really hard towards the same goal and when you get beaten, it’s sometimes hard to accept – even if you’re happy for the other person. We try to play fair, be honest and kind to each other.

What is your best memory from Les Gets?

Loïc: During the 2019 World Cup, there was this crazy crowd between the finish line and the podium and it was a real challenge to reach the podium. After the awards ceremony I had to go and do the anti-doping tests. There were so many spectators that Vévé from the police had to put me in a police car with the flashing lights to get me through the crowd. It was crazy!

Amaury: The 2019 World Cup in Les Gets is the best memory that I have of any competition. It’s not just about crossing the line, there was an incredible competitive spirit the whole weekend: in training, hundreds of spectators along the track, the chainsaws and the crowd going wild at the finish line. Not-to-mention the Marseillaise which could be heard throughout the whole village, it really was a great moment. I’ve got some great memories from crazy nights at the Barbylone too.

How do you think the 2022 World Championships will go?

Loïc: Given the atmosphere in 2019, I think it will be crazy. I’m really looking forward to the World Championships in France. It’ll be a first for me. I sincerely hope to be in with a chance for the title. Also, the level of the French riders is very high at the moment, so if this level is maintained for 2022, these World Championships in France could be among the best of all time.

Amaury: For the moment, I’m pretty focused on this year which is going to be an important one for me after my injury. The World Championships in France in 2022 are going to be spectacular, for sure. Racing at home in front of my own crowd is going to give me even more of a buzz. I absolutely can’t wait! 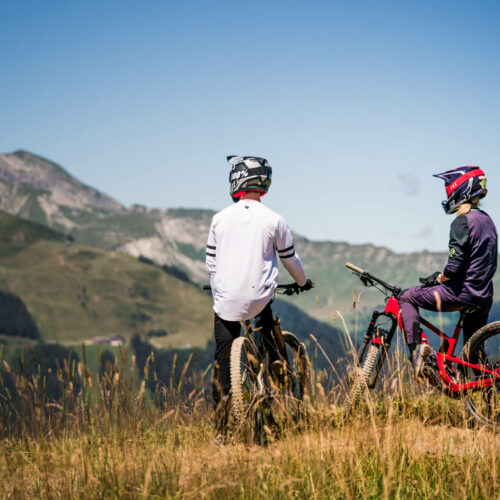 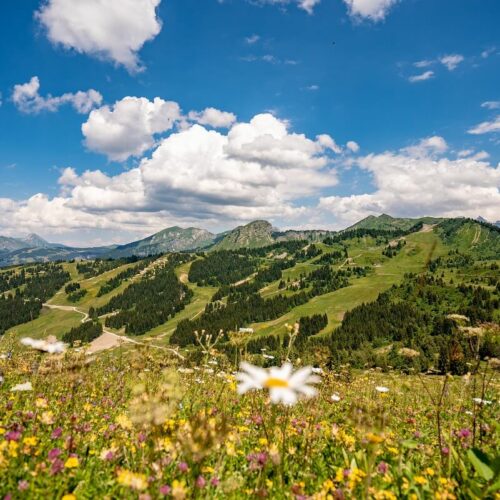 Don’t miss out on Les Gets Booking’s good deals for your next summer holidays in the mountains : discount on passes, transfers, leisure activities…